Look online to try to find call to action button secrets, and this is what you get: 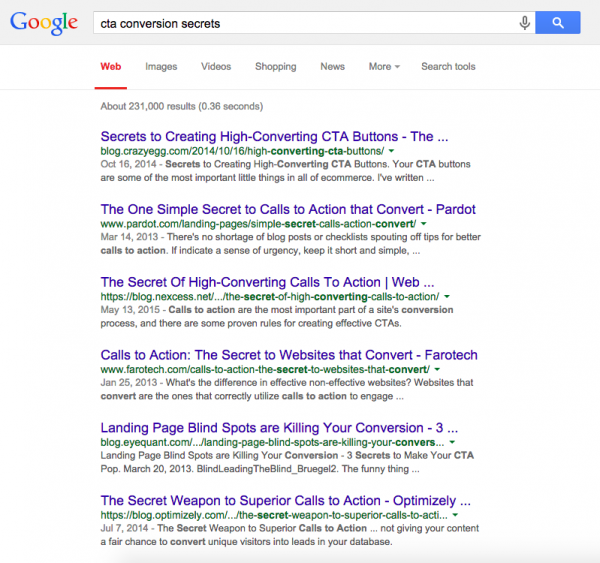 Are you sure these are secrets?

Apparently, the secret’s out. And everybody and their brother seems to think they’re some of the select few who are “expert” enough to share those secrets with you.

Not exactly buying into it?

The truth of the matter is “secret” is a pretty hyped-up word. And since anyone can post anything online, they can make the claim that anything is “secret.”

And after going through all these articles… guess what?

They pretty much all said the same thing. And for someone who’s been at this online marketing / conversion game for a while, it was nothing new, and certainly nothing “secret.”

Yes, these obvious ‘secrets’ are good advice… I follow them for myself and advise them for my clients. But they’re pretty well-known to anyone who’s been working on landing page conversion optimization for more than two days.

As the godfather of advertising David Ogilvy put it, “God is in the details.” Not referring to religion in any way, but meaning, instead, that the places where you find and get the most good out of your advertising (and call to action) efforts, is by paying attention to the details – especially the ones that are easily overlooked.

And when online visitors now have less attention span than that of a common goldfish, those details are more important than ever. (Yes, we have an 8-second attention span and our children’s goldfishes have 9 seconds.)

Yes, like it or not, we’ve got less of an attention span online than this guy – Image source

So how do you substantially increase your call to action button conversions and capture attention on your CTAs using advice that’s a little less-than obvious?

1) Use Two Very Specific Words on Your Button

Specifically, those two words are “get” and “your.”

According to Anne Murphy of Kapost, more than 66% of their top-performing calls to action have the word “get” in them. Specifically, 10 out of 15.

And the word “your” was in nine of them.

Not surprisingly, she says “Get Your” was their most effective word combination on call to action buttons out of any of the combinations they tried.

The A/B testing pros that they are, these words weren’t just chosen and thrown together at random. These two words—especially when put together—are incredibly benefit-driven and prompt action.

Kapost has found that their visitors like things fast.

The deeper secret here, beyond using call to action text beyond the generic “Submit” is to pay attention to the words you use and how your audience responds to them.

Kapost found their audience responds really well to fast-paced CTA wording like “Get It Here”, so that’s what they use.

Unless you’ve explained the urgency in the lead-up text or have some kind of countdown ticker in your call to action capture form, the letters “N-O-W” thrown together on a CTA are just dead, meaningless space.

If you don’t want to change your page text, then just leave them off.

It’s true that creating a sense of urgency increases conversions, but only adding “now” to your call to action button text doesn’t create any legitimate, authentic urgency for your readers to pay attention to.

But if you want that urgency, make sure you explain why signing up or downloading something now rather than tomorrow or next week is so crucial.

Will your membership program close after a certain number of signups?
Is a discounted price only available for 24 hours?

If yes, “Now” is fine. If not, think of focusing on other value-driven benefits. 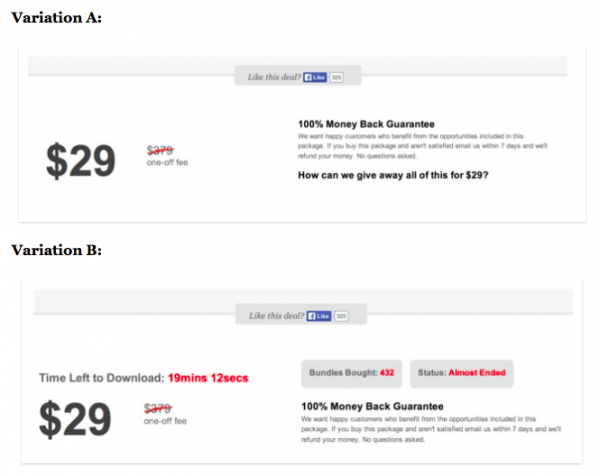 Which one would make you convert?

Peep Laja at ConversionXL shows these two variations that he split-tested for the exact same offer.

Everything about the two offers is exactly the same, except Variation B adds a real sense of urgency… and it saw three times as many conversions.

3) ONE Action Per Page

Ok, yes, I did list this one when I was talking about obvious advice that isn’t exactly a “secret.”

But this is the one piece of conversion advice that everyone loves to preach but NO ONE follows.

If you want people to sign up for a free trial, make all your content and call to action forms and buttons driven around your free trial.

If you want people to download your free ebook guide, focus on that.

If you want people to buy a product, talk about the value, the benefits, and how they’ll get an incredible bang for their buck.

But by all means, do not offer all three. Heck, don’t even mix two of them.

It all boils down to the paradox of choice. (The video’s 20 minutes long and well worth it, if you ask me.)

And the paradox of choice boils down to this: if you give people more than one option, they go into a decision paralysis and don’t know what to do.

Not only are you less likely to get more money-driven conversions, you’re going to see less conversions over all, no matter what those conversions are for. 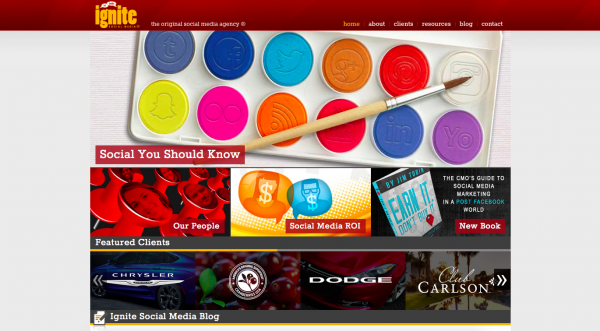 Ignite is trying to be everything all at once by offering case studies, a free ebook, and a link to their read their blog, among other things. 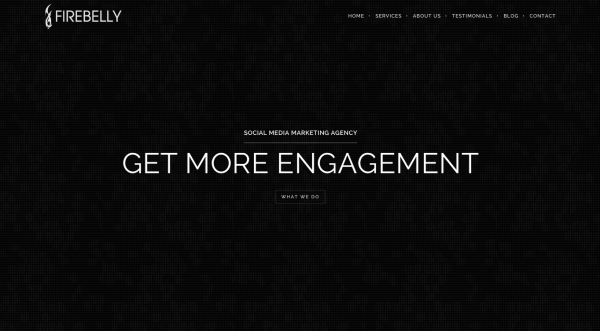 Firebelly has only one hyper-focused call to action to invite the reader to find out more about them.

One, Ignite, is trying to be everything all at once by offering case studies, a free ebook, and a link to their read their blog, among other things.

Firebelly, on the other hand, only has one hyper-focused call to action to invite the reader to find out more about them.

Which page would you be more likely to stick around on?

“I love the analogy of lead-gen being like a date,” said iQMetrix’s Beth Wanner on Uberflip.

I’m probably not going to pay $9.99 for some dude’s ebook that I’ve never heard of.

But if I’ve read blog posts by this guy, seen his reviews, and know other people like him… I’m going to be far more likely to whip out my credit card and shell out the money.

To build the relationship with a reader, do your best to offer high-quality, valuable content in your emails, blog posts, and freebie downloads.

The more you romance them with your value, the more likely they are to fall for your conversion attempts.

“Succeeding at converting visitors into customers is not the end goal for the vast, vast majority of companies,”

“Unless you have a product that you’re only ever going to sell once.”

“Usually, companies have a relationship they want to build with their customers,” 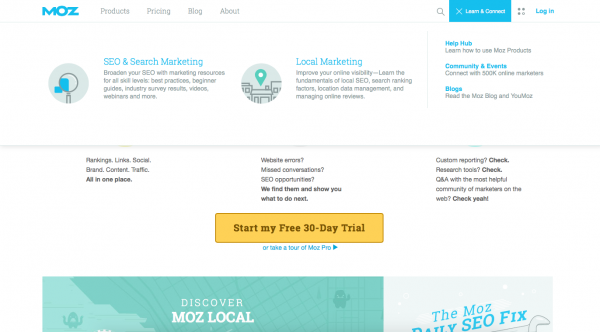 Moz builds a relationship with their visitors by offering a “Learn & Connect” tab.

This tab teaches them how to simply get better at SEO – whether they buy in or not – and lets them get and stay in touch with Moz to build their blossoming relationship.

5) Data > Creativity, Not the Other Way Around

“It’s a bit counterintuitive but we’ve found that taking a data-driven approach helps us unlock more creativity across all of our marketing efforts,”

“Instead of debating the new design internally for weeks, we can put it on our site and measure how it performs.”

So even though you might feel an insanely creative whim while you’re out hiking in nature or sipping a fresh cup of coffee on a cool morning just after the sunrise, that’s not where the “secrets” to better conversions are found.

The ideas just might be the best ones you’ve ever had, but they might be total crap, too.

Data is what will tell you whether you’re onto something or whether you were still in a sleep-induced state when the “brilliance” popped into your mind.

(Please don’t think I’m a creativity-hating troll. I love it and think it’s beautiful. But we’re not here to talk about the beauty of art, we’re here to convert visitors into customers.)

And since a whopping 60% to 70% of content churned out by B2B marketers never gets read, it’s pretty clear that things like creativity and trusting your gut on what your audience wants or needs – whether in a downloadable ebook or your actual sales page and CTA content – doesn’t work as well as we’d like.

So even if the only thing you do is assign someone to regularly check and maintain Google Analytics, it’s better than nothing. 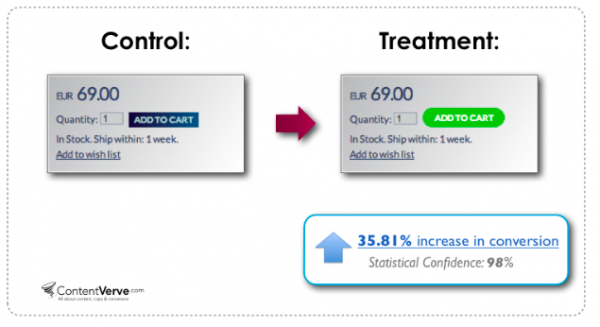 Above is an example from ContentVerve of Data vs. Creativity that I personally loathe.

As a writer, I like to think that creative words can do absolutely everything.

Plain and simple, people don’t like to be bossed around.

Telling people that they must do something right now or else is just going to piss them off and make you come across as one of those spammy marketing guys that no one likes.

I know, you really do have the best offer out there, and people really do need to start using your SaaS tool today so they can save huge headaches and loads of money.

But they’re probably not so sure yet.

Going back to point 4, be nice and romance them a bit. Whisper sweet nothings in their ears if you want to.

But most importantly, don’t boss them around telling them what to do. Instead, offer yourself and your value.

Don’t focus on the action that they have to take in order to get that value (because it’s probably really freaking easy, so don’t make it seem like a chore).

Focus on all the greatness that they’re going to receive.

Dave Navarro, The Launch Coach, suggests writing your CTA copy in your own voice to help you get around sounding like you’ve got a sour attitude.

he says, “It (writing in your own voice) will not help you because you’re selling to random, cold readers instead of an audience of people who are predisposed to be responsive to you – in other words, a list of people who know, like, and trust you.”

The whole “predisposed to be responsive to you” point is a big one.

Think of them as your friends, and how you’d talk to a friend if you were trying to convince them to use or buy something you know would make their life or business better.

When that happens, you’re far, far less likely to come across as an ass hole that they don’t want to listen to.

(And they’re far more likely to opt-in to whatever it is you’re offering, because you feel trustworthy.)

FreshBooks does a great job at this.

The way they talk to me, I feel like they’re my friends, even though I’ve never met a single person that works there.

They don’t boss me around or put pressure on me to sign up, they just try to help me.

Hopefully, by the end of this article, you’ve got at least one or two solid, actionable ideas you can take away to start seeing a real increase in conversions with your call to actions… or at least a few things you want to test.

But to keep the conversation going, what are some of the best things you’ve done with your CTAs to increase conversions?

How much did it help you? What else do you want to try?