Do you put any weight behind the saying “trust but verify?” If so, then you’ve probably been looking for some Facebook Remarketing statistics to back up how powerful they claim to be.

Word on the street is that retargeting delivers high ROIs when it comes to ad spend. And it’s been reported that CPC rates for Facebook Remarketing Ads are some of the best around.

But is this just hype? Or is Facebook Remarketing an online advertising strategy that really works?

In this post, we’ll help you separate fact from fiction. Armed with real, actual facts and figures drawn from right the most reputable sources on the SERP, you’ll be all set to prepare and optimize your digital campaigns.

Let’s get started with the basics.

According to Smart Insights 96.7 % of people will leave your site or app without buying anything. This means that you’re losing the vast majority of your traffic before you even do anything wrong. That doesn’t leave a lot of wiggle room for wasteful mistakes.

Yep, fewer than 4% of people who interact with your brand online for the first time will buy from you.

On top of that, even if you beat the odds stacked against you, it turns out that you have another battle to fight. Apparently, digital shoppers find it easier to walk away from an online sale versus a bricks & mortar one. 41% of shoppers  abandoned a transaction at a virtual check-out in 2018, compared to 24% who walked away from a purchase in-store.

Looks like a pressing problem – one we need to find a solution for immediately.

How Do We Get Those Customers Back?

The answer lies in remarketing.

Facebook Remarketing gives you a way to re-engage with past visitors and push them down the sales funnel to purchase.

“Remarketing allows you to put targeted ads in front of people who’ve left your site while they’re browsing elsewhere online. You not only provide a more customized experience, but you do so in an unbranded and lower pressure environment. Both of which help conversion rates.”

Remarketing Ads? The Numbers Are In…

The time has come to answer the hype behind the question: Are remarketing ads better value for money than traditional ads?

According to the retargeting statistics we came across it’s a big, resounding ‘Yes’.

The folks at connectIO reveal that retargeting ads are 76% more likely to get clicks than Display Ads. And according to Growthbadger people are 70% more likely to convert when they are retargeted.

Certain retailers are reporting an even bigger rise in conversions. Brands like Tire-maker Tirendo reported 161% increases after switching from traditional to remarketing ads.

Growthbadger also shared this: The cost per acquisition (CPA) from a recent remarketing campaign worked out 32% lower than from a regular search ads campaign (and 65% lower than regular display). 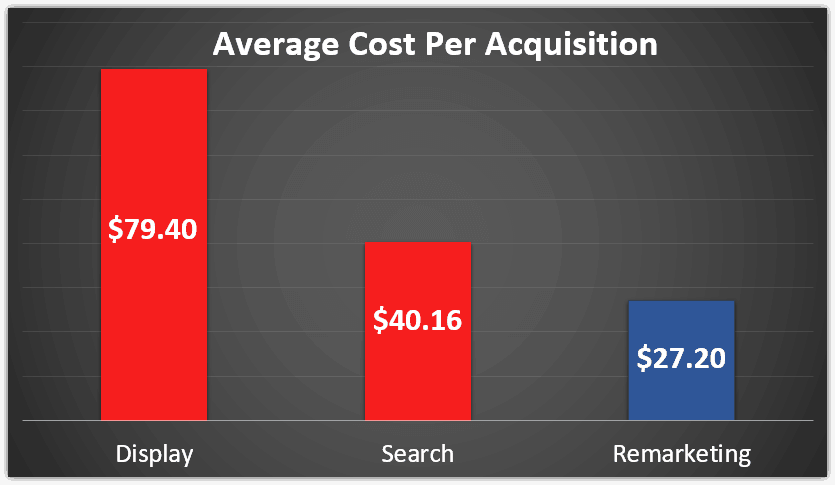 There are the Facebook Remarketing Statistics worth remembering – image source

If the idea of Facebook Retargeting is starting to tempt you, you can start by learning some remarketing tips from the big brands that are constantly raking in the big bugs with this money-making tactic.

Impressed yet? Well if you aren’t… keep on reading.

It turns out that not everyone is as impressed with retargeting as we are. Which isn’t too surprising given that remarketing involves using cookies (pixel code) to track specific users and continually advertise to them with increasing accuracy.

Lucky for us, the battle between the two sides of this debate has yielded some very interesting Facebook Remarketing stats:

According to eMarketer in their recent report Consumer Attitudes on Marketing 2019 one in four US consumers are currently using a form of ad blocking. Obviously some people don’t like being followed around the internet.

But don’t get too downcast yet.

56% of users surveyed in September 2018 by programmatic exchange OpenX and The Harris Poll said relevant ads didn’t bother them.

And on top of that, Salesforce reports that US consumers will tolerate ads if they’re expecting them and/or if they’re incentivized. And of those with 57% percent of consumers stating that they’re willing to share personal data in exchange for personalized offers or discounts.

These stats are backed up by Smart insights who report that consumers are willing to sacrifice their privacy in order to get a better deal – as in 47% of people said they were comfortable being tracked online if they could get a better deal on a product or service.

“The takeaways are simple: Consumers will engage with your remarketing ads so long as your ads are worthwhile and reflect their experience with your brand consistently throughout the remarketing process. If it’s going to get them a better deal in the end, most people are in for the ride.”

Since this post is about Facebook Remarketing Statistics it’s probably worth mentioning that ad blocking on social media networks is harder to do.

While Facebook doesn’t give users the option to stop ads entirely, it does give them the option to select to see only the ads that are most relevant to them. This can mean good news for you Facebook remarketers. And it can also mean bad news if you don’t know who you’re targeting.

This customizable ad preferences in Facebook’s user interface means that only ads that are highly relevant to the user’s search activity and behavior will be shown. This means that you’re audiences are likely to be more limited, by much more engaged and more likely to convert.

Only one of the many reasons (say…157 or so?) that Facebook Remarketing is so powerful.

What Are The Most Popular Remarketing Platforms to Advertise On?

Let’s start with a brief snapshot of the playing field to better understand which platforms have which remarketing strengths. 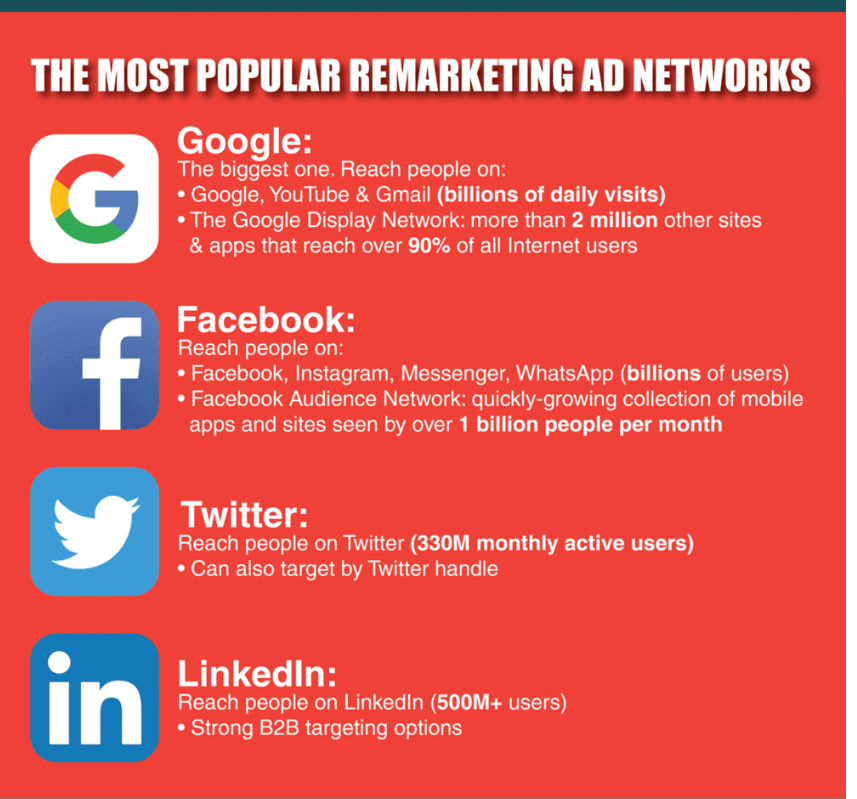 Beyond search most marketers turn to Facebook – image source

According to Growthbadger, social media sites are where you should be focusing your retargeting strategies:

“Social media is becoming a bigger and bigger part of our eCommerce and economic cycles – to the point now where it’s nearly a driving force. Nearly 40% of all digital consumers draw their purchase inspiration from the ‘Big Three’ of Social Media.”

You can look at a more complete breakdown of the reported purchase inspirations as of last year in the chart below. 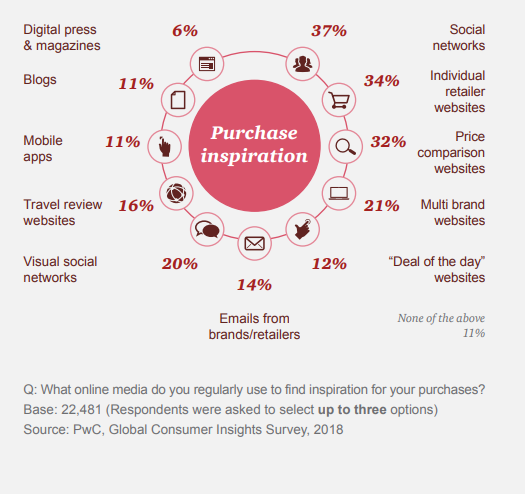 The folks over at connectio.io agree and tell us that 57% of marketers think social media is trending as a location for retargeting. This isn’t too shocking seeing that when people are on their personal networks they’re relaxed, engaged and hopefully open to suggestion.

So, now that we’ve worked out why social media is probably a good place to start your retargeting campaigns, how do we settle on Facebook for our platform? Well, read on my friend, and you shall see.

Well, let’s start with a simple answer to that question:

Because it’s the biggest and fastest growing online social networking site in the world with 2.2 billion active users on the main platform (as reported in the latest earnings release).

So it’s a safe bet your customers are on there as well as your competitors.

Plus, in an eMarketer survey, 95% of social media marketers cited Facebook as the platform to advertise on because it gave them the highest ROI. And it doesn’t stop there. These timely Facebook stats (provided courtesy of Hootsuite) reveal why Facebook is so attractive to advertisers: 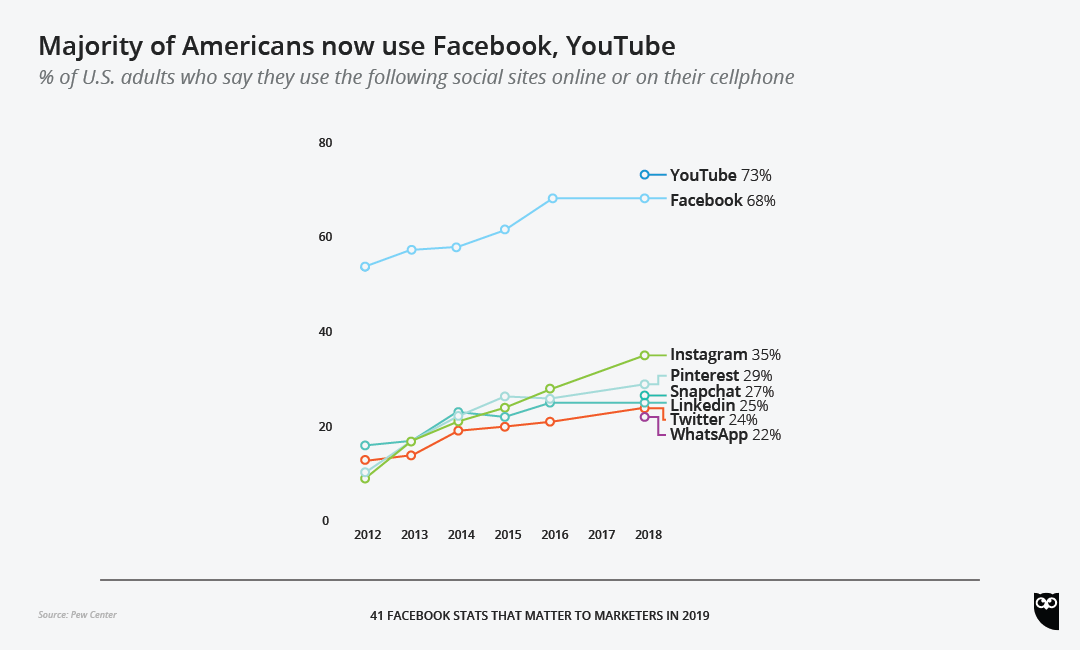 Not just quantity of users, but the quality of engagement – image source

The buck doesn’t stop there. You can keep on reading to see some Facebook Remarketing statistics about just how much this massive audience is actively engaging with your ad content.

Now you’ve been bombarded with stats about Facebook Remarketing let’s put the two together for the big event… The stats you were really promised.

With 80 million active Business Facebook pages it’s getting harder to stand out from the crowd.

Hootsuite’s 2018 Barometer Report illustrate that 98% of B2C businesses use Facebook compared to 89% of B2B companies.

To separate your business from the ‘white noise’ you need to need to streamline your advertising campaigns. Retargeting to Custom Audiences on Facebook is a great place to start.

You can create Custom Audiences based on existing customers, on visitors to your website (by page or all-site) or by actions people have taken in your apps.

Current customers are a good place to start because these people already know your brand and they’re primed to hear from you. (A  study by Adobe revealed that 41% of e-commerce spend is a result of repeat-purchasing in the US).

“It’s cheaper to get people to purchase again than to recruit new customers – Repeat customers are responsible for generating 40% of revenue in some cases. So why not double down on your most profitable clientele?”

Retargeting is a powerful tool when it comes to building brand awareness.

Here’s a stat that says retargeting can lead to a 726% increase in site visits over a 4 week period. That’s intense.

But if that ‘don’t impressa you much’ – according to connectio, Retargeting Ads can lead to a 1046% increase in branded search. This stat shows that when someone has seen your Remarketing Ad they’re more likely to keep you top of mind and when they come back to browse – they’ll  search for you again.

Not only can this boost your rankings in search but increase your leads and ultimately your conversions.

Not only can you create Custom Audiences in Facebook which target people who’ve interacted with your brand (e.g. read your posts, signed up for your email list etc.). You can also create Lookalike Audiences, which you can see the value of below:

For more info on finding your perfect Facebook audience and remarketing strategy head over here.

Still Not Convinced? Check Out This Case Example

If you aren’t convinced yet here’s my final attempt. Below you can check out this successful example of what Facebook Remarketing can do when implemented correctly. And these are without even reaching out to a professional PPC agency like yours truly. 😉

Their results? They attracted 46,000 unique customers in its first 6 months, decreased their Cost Per Purchase by 24%, and increased customer volume by 300% over 18 months. 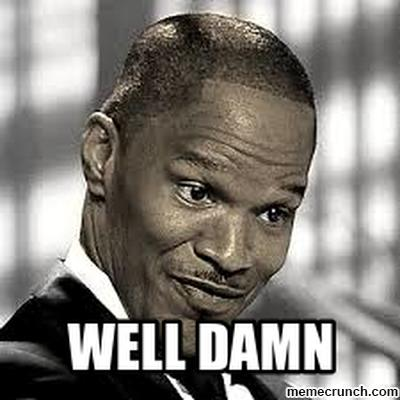 You’re now in possession of a ton of statistics you didn’t know – or didn’t know you needed to know – before now. But don’t worry. Your efforts thus far have not been in vain.

Even more importantly, however, by looking at these stats and numbers – you’ll now be more aware of the areas where you should be putting your marketing budget and your precious time.

If these facts and figures have given you food for thought when it comes to planning your next PPC campaign we have many useful resources that will help.