AdWords Update 2018: The Good & Bad Of The New AdWords Interface

I’ve decided to provide an AdWords update for those who might have missed some of the cool (and maybe not so cool changes) being made. I know you all are busy little bees.

And guess what — since this post was originally published, Google has even rebranded AdWords to Google Ads. So there’s more than plenty to cover in terms of updates.

Guys and gals, 2017 is over, that flew by, huh? We’re already in March…can you believe it?

Things that happened this year: people said Gucci Gang way too much, this 16-year old got a lifetime supply of Wendy’s chicken nuggets, Chance the Rapper won a Grammy, and Luke (our Garlic Bread Specialist) won his fantasy football league. 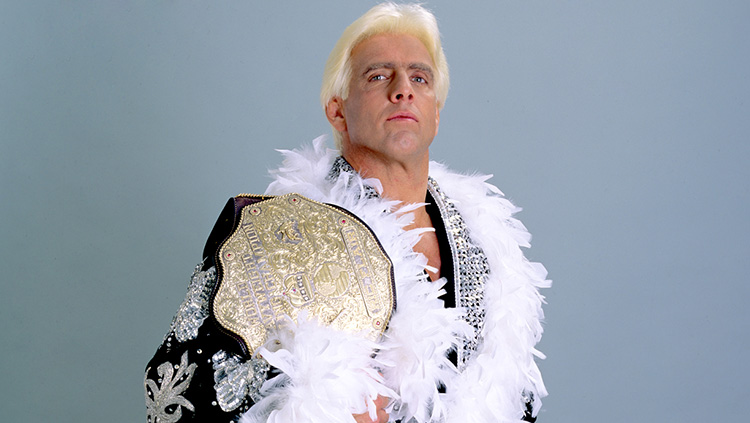 Oh, yeah, and Google announced a small change to the AdWords interface.


All About The New AdWords Interface 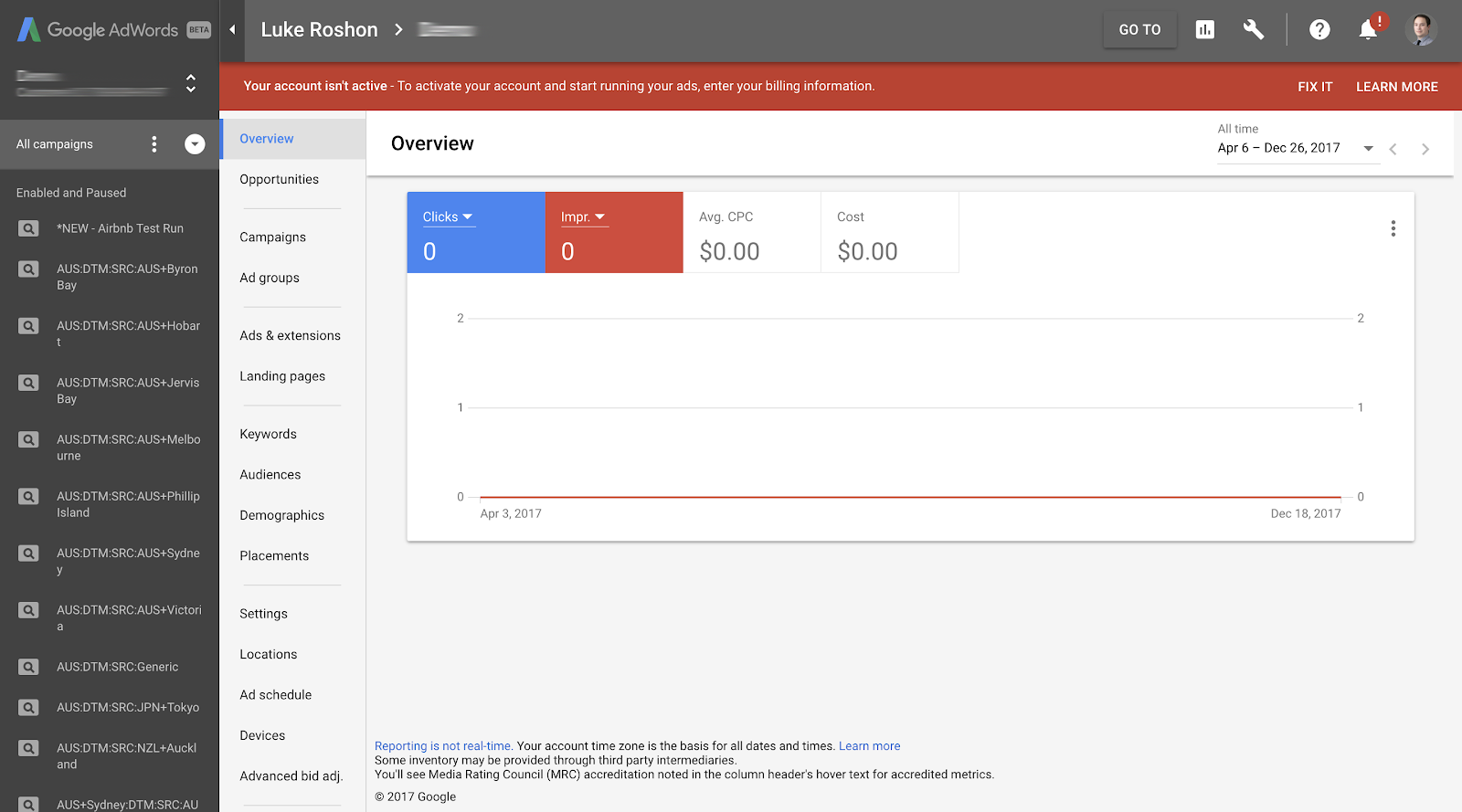 2018 is on the horizon and there are always big changes on the horizon in the world of digital marketing, but adapting to the new AdWords interface is going to be a huge task for continued success in the new year.

The new interface promises to make our lives easier: it introduces more friendly native reporting within the AdWords interface, cool new tools like promotion extensions, and an objectively easier way to navigate from campaign to campaign, ad group to ad group, and keyword to keyword.

WE HATE IT. Okay, that’s a bit strong — but the popular opinion is that it’s not great.

The reality is, change is always met with criticism, and when the old AdWords interface is officially sunsets this year, the outcry will be fierce. But, that interface has more or less been around since 2008, which is an insane amount of time for something in the tech world, especially a Google product.

In short, the new interface is going to be disliked–but with some time, not only will we get used to it, but it likely will be a significantly more powerful than the decade old interface we’re currently familiar with.

As our Director of PPC puts it:


“I’d say that the new interface doesn’t necessarily blow, but it’s more that people are resistant to change. For the most part, the AdWords interface has remained pretty consistent for the last several years and this is a pretty drastic makeover that they’re trying to pull off. I’ve found that a lot of marketers are reluctant to invest the time into learning it. With that said, it does have new features, such as using keyboard shortcuts, that people will like. However, I think the biggest setback is just the look and feel.”

Obviously, adapting to new update is going to affect all of our online workflows in 2018. Things like bid adjustments, keyword planner, and search terms all have new homes–and once we learn them, we’ll be able to get back to the most efficient way of doing business.

The interface also houses a couple of cool new features, like the aforementioned promotion extensions and an n-gram analysis native to the AdWords interface.

Let’s dive in from the top.

When you first pop open the AdWords interface, you’ll be taken to the Overview/Home tab:

Before, it just looked like a bunch of data and no clear definition of where the separation was.

It was a little overwhelming to look at and would give you buckets of criteria for keywords, ad groups, and campaigns. But this area on the new interface is a little easier on the eyes.

You can quickly visualize some top-level data in your account.

From here, select the dropdown arrows in tabs to add additional or varying lines to the graph.

You see a quick overview of biggest changes and campaigns.

Further down, we can quickly visualize our top spending keywords, see what search terms and words triggered the most ads, what devices are contributing to our success, and what our most shown ad is. 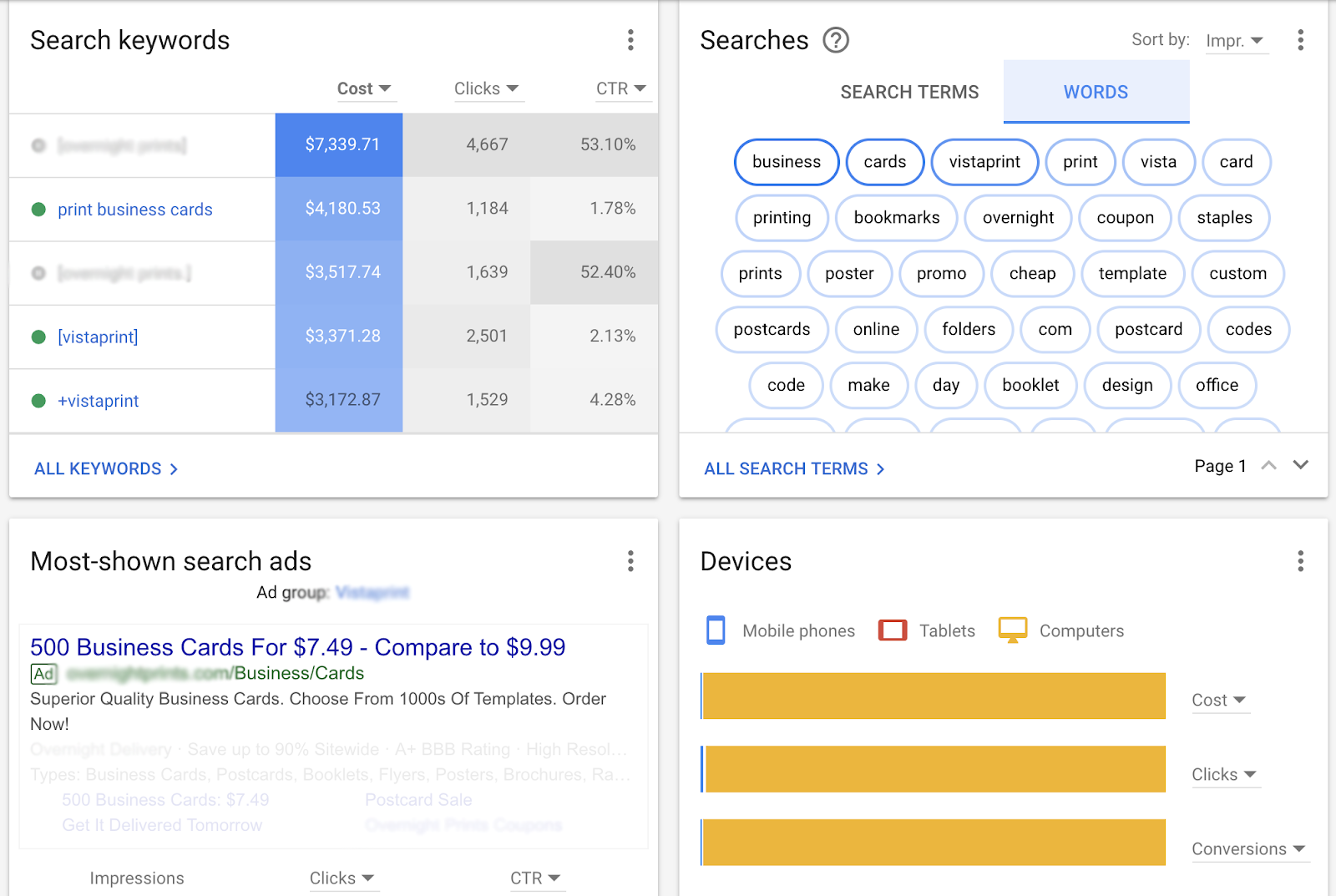 The top right is a super helpful native n-gram analysis that will make it easier than ever to isolate search terms in order to make your AdWords accounts more granular.

At the bottom of the Overview page, you can see how you’re performing per network and see what times and days you’re having success. But, most interestingly, you can also easily see your overall auction insights. 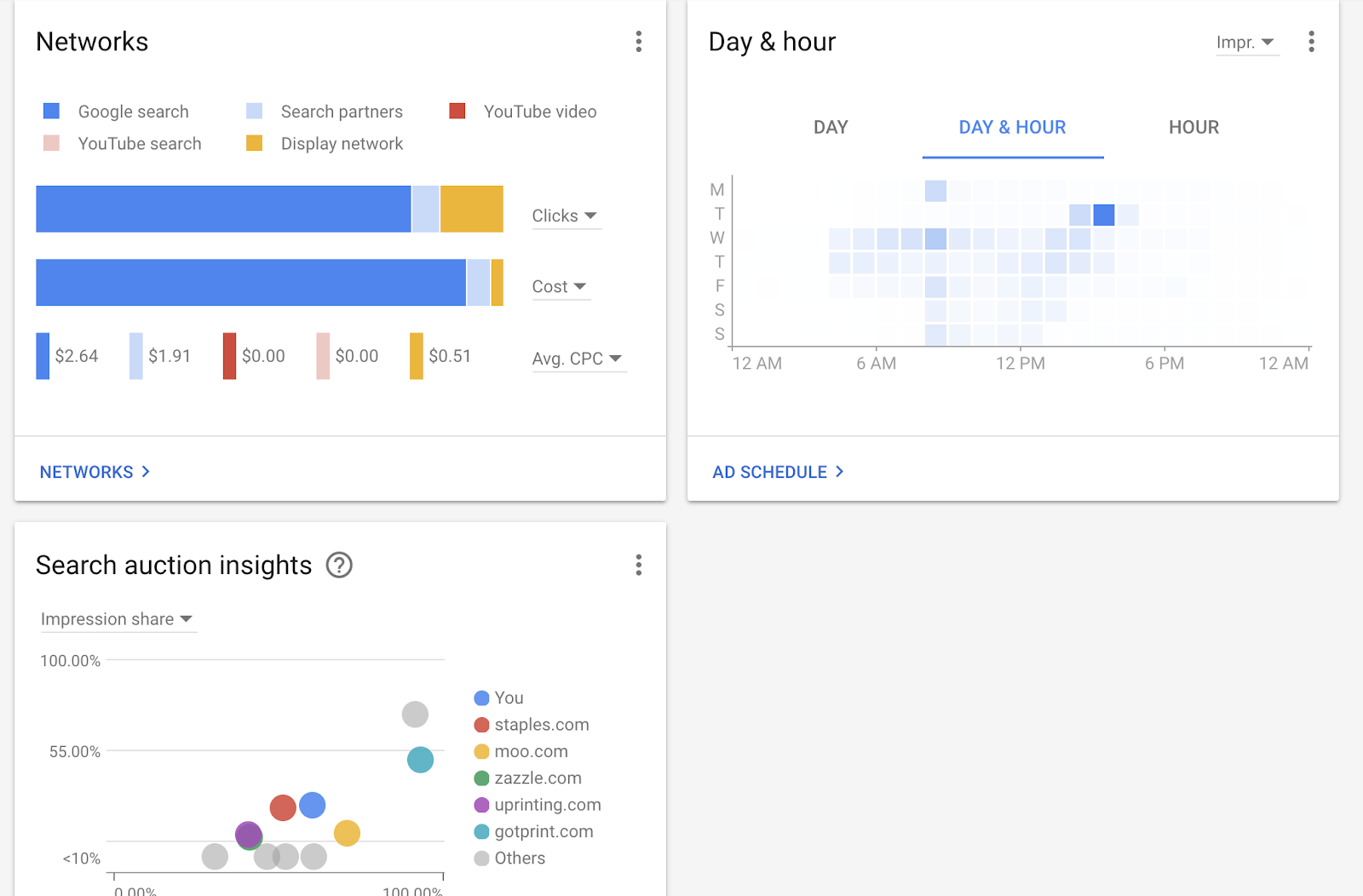 Keep tabs on your competitors and see how you can perform better in the AdWords auction with insights at the bottom left.

Another important change in the new interface is the improved time navigation window. 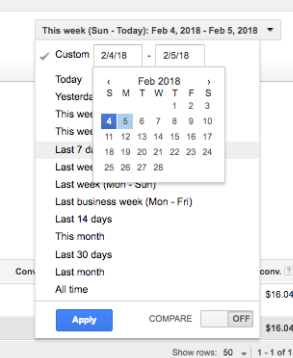 This is how it looked before.

You’ll find it in the top right, so not much has changed there. 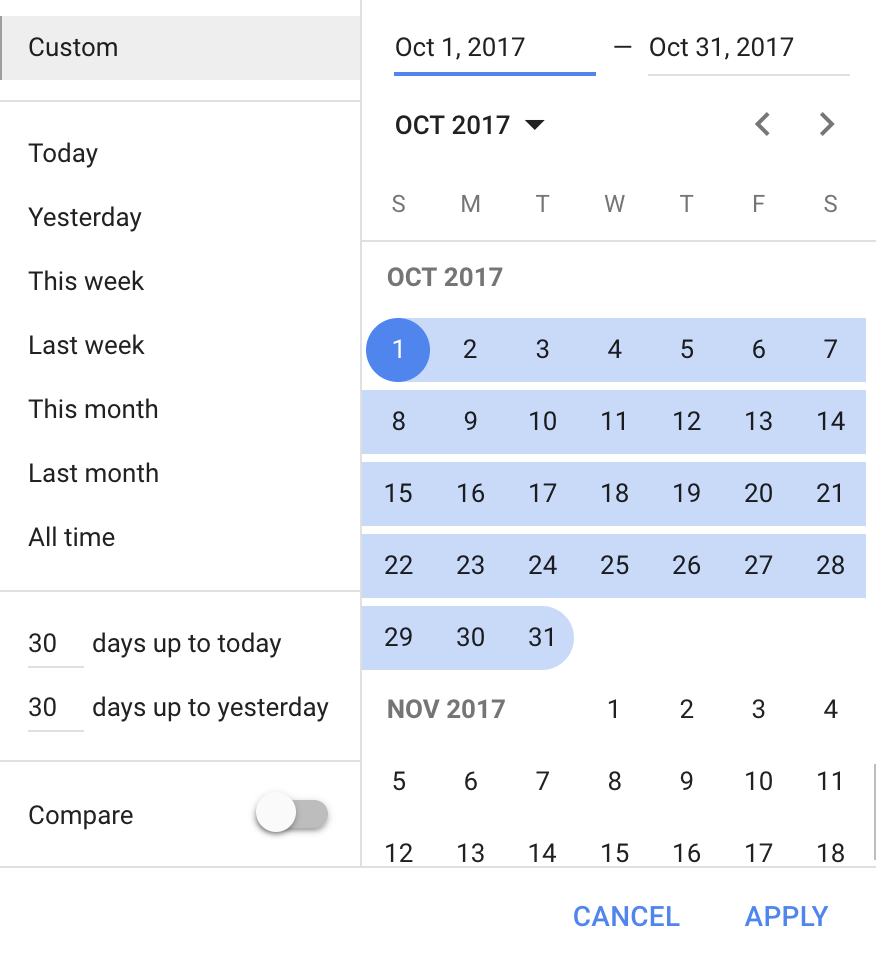 But I promise it can do cool stuff (two, in particular).

First, it’s now scrollable, so it’s way easier to navigate a few months back without having to type in the date range you’re looking for (but this is still an option if you prefer).

Like a million times right? Same here. No more, as you can now change the date range in the bottom left of the menu to be 90 days up to today, or whatever other date range you want. 🙂 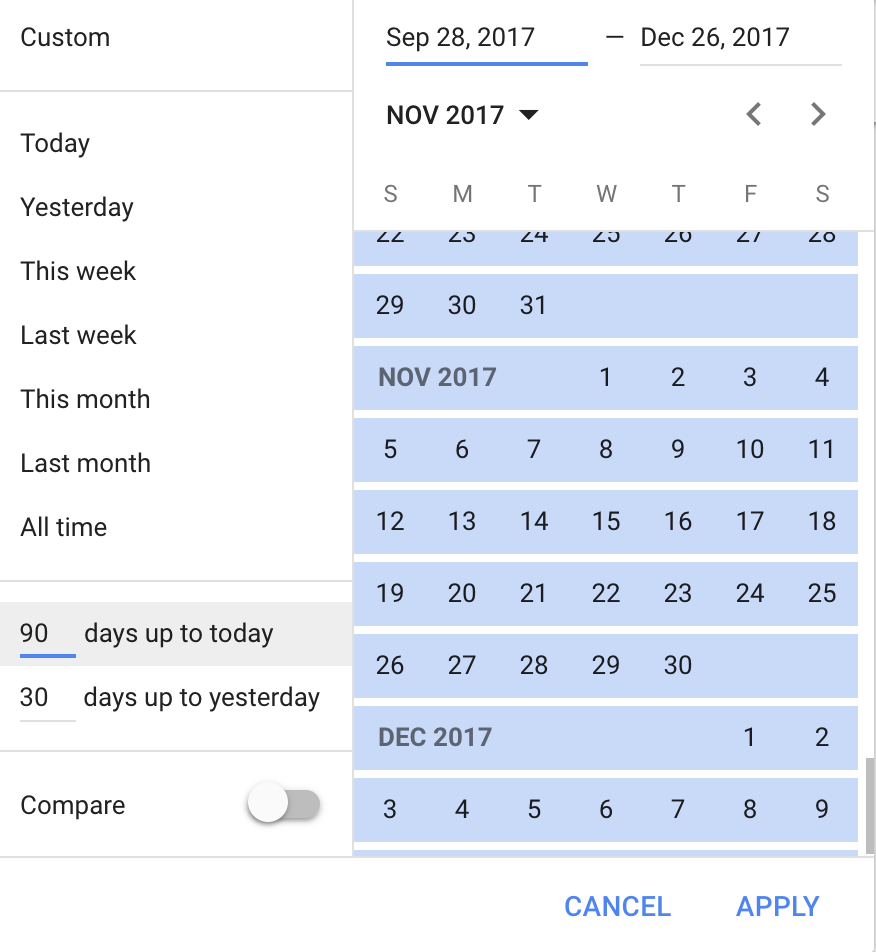 Seriously, I’ve never been so excited about something.

The thing our Garlic Bread Specialist, Luke, likes most about the new AdWords interface is a feature that he likes to refer to as “The Stack,” which makes it easier than ever before to hop between campaigns, ad groups, and all of their underlying layers — well, that is for some. 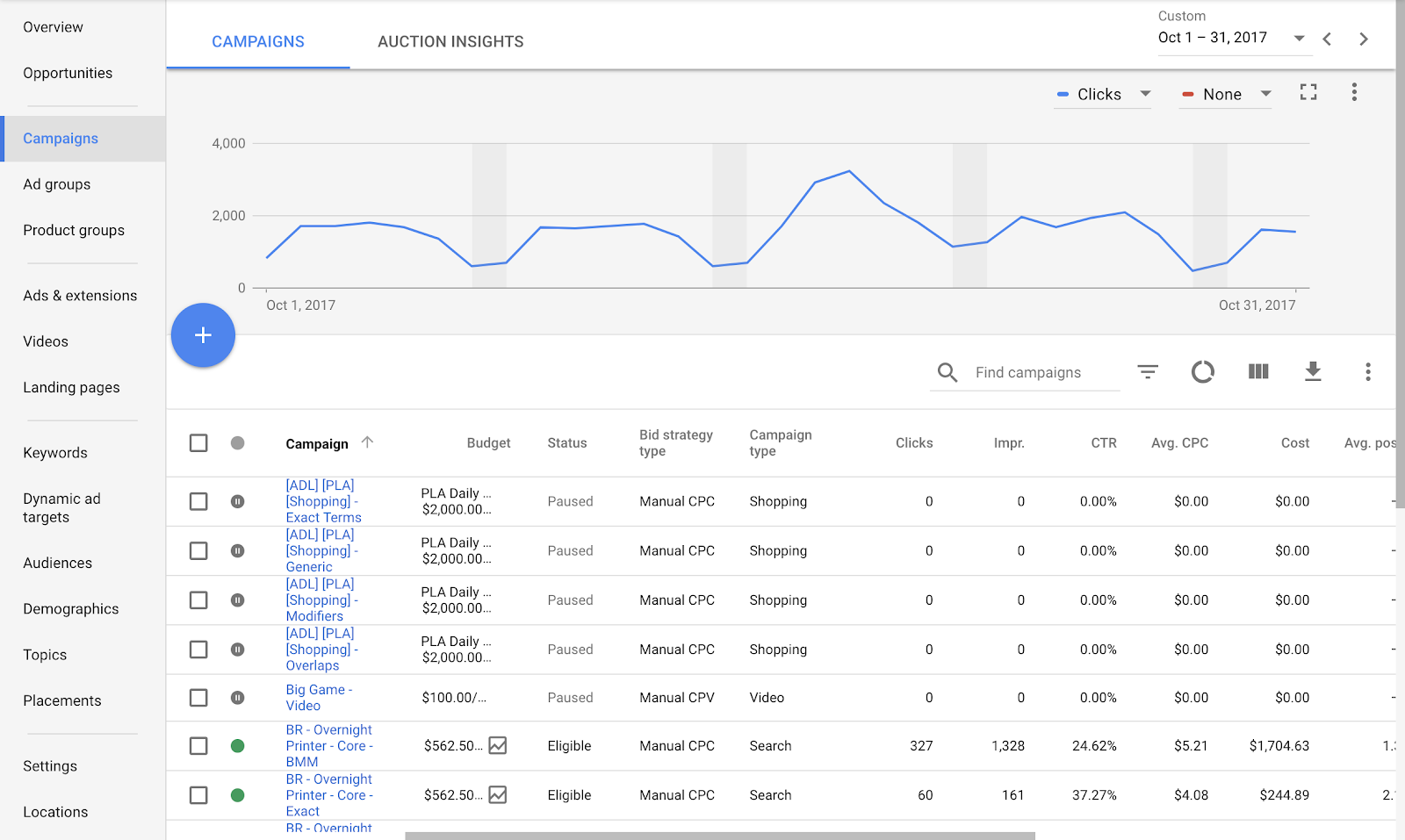 See the thing on the left?

In the old interface, your campaigns, ad groups, etc. were displayed left to right near the top of the screen:

This doesn’t make much logical sense.

When you think about the layers of an AdWords account, you think about: Campaigns contain Ad Groups, which contain Keywords/Targeting/Ads, which are triggered by Search Terms.

You’ll see that “The Stack” flows logically this way, with account level information (Overview) at the top, Campaigns and Ad Groups in the section below, while targeting options and ads are in their own self-contained sections below.

The very first button underneath Overview and Opportunities is Campaigns.

From there, you can click on any of your campaigns to get down to the ad or product group view, where you can then click to an ad group to view keywords within an ad group.

If you look at the stack again on the left, you’ll see that you’re able to then navigate to view all of your different targeting options, similar to the current interface.

So, perhaps, it’s not all bad — just different.


Downsides to the New AdWords Interface

As logical as this new interface layout may seem, there are some downsides.

“Clear lines and color differentiations are essential when looking at large amounts of data. Unfortunately, in the new interface, the table has no gridlines. Also, the filters used to stand out in yellow, but now all are in blue bubbles (the same color) which doesn’t pop enough.”

How the interface looked before with filters.

How the interface looks now with filters.

Toggling from Pages: Can I Do This Anymore?

Missy is not the only one who isn’t too thrilled with the navigation. As our Director of SaaS, Kim, puts it:

“Toggling from one page to the other is not possible with the new design. For example, in the old design, when I’m in a specific campaign and want to look at the keywords in each ad groups individually and quickly, I can press on the Next button in the top right to look at the next set of keywords in the next ad group. With the new design I can’t toggle to the next ad group. Instead, I’ll have to click back out to my campaign and look for the next ad group to go into. This makes it inefficient and the possibility of losing my place in the sequence of ad groups.”

No, this is not efficient.

For our Account Manager, Spencer, his biggest frustration is there’s less ease in accessing the most used functions:

“For most of my clients, any question they ask or any stats I want to analyze, I go straight to the Dimensions tab. Only problem is, on the new interface, it’s almost impossible to find.” 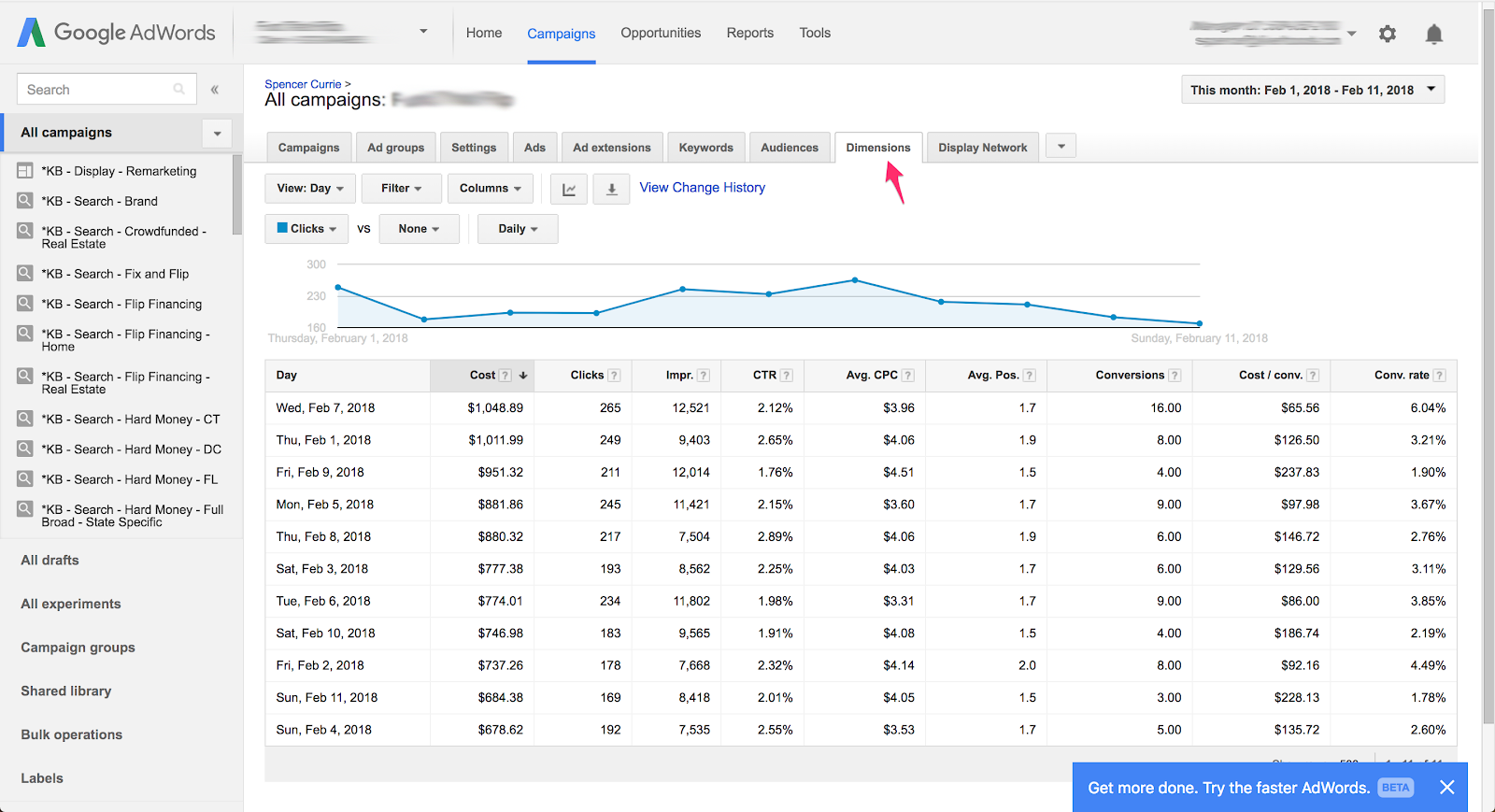 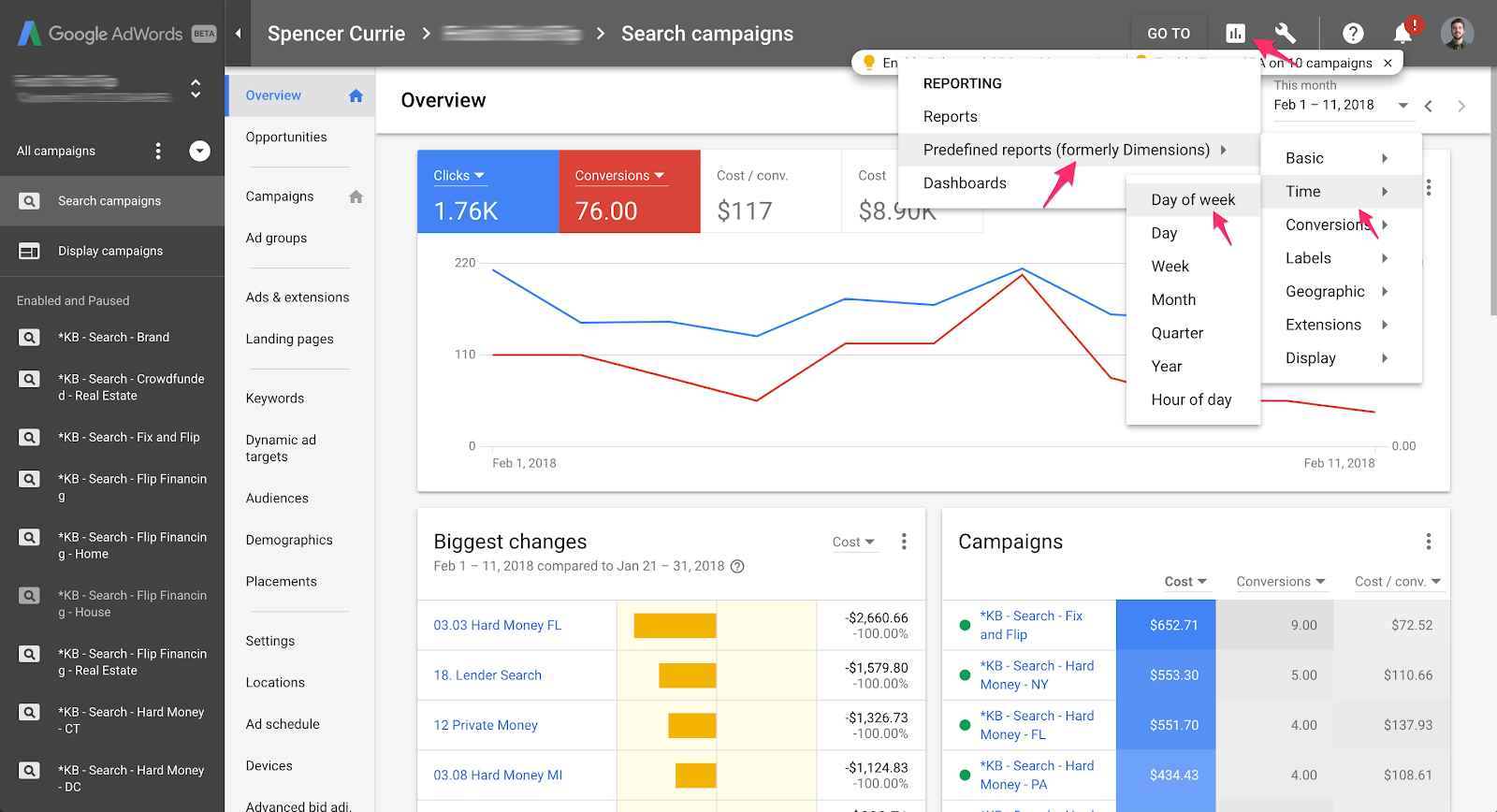 This is going to take some time to get used to.

The Visuals in General: Just Harder To Read

So, as previously mentioned, I was a fan of the visual look of the main dashboard, but not everything looks better visually in the new interface. Of course, this all comes down to preference. As our Senior Account Manager, Reese, puts its:

“I don’t hate everything about the new AdWords interface, but I do hate the fact that it’s just harder to read. Fonts that were previously dark and bold in the old interface have been made lighter and smaller. Couple that with all of the extra visualizations and darker background of the interface, and it’s just a complete headache to read.”

For someone who doesn’t have great vision, there’s going to be a lot more pulling out of the glasses.

Replacing Labels & Features: If Not Broke, Don’t Fix It

Okay, so not to completely slam the new interface, the Overview tab offers a lot of good insight about accounts overall. But a lot of charts and graphs given are easily accessible and doable through Excel, and it really doesn’t take too much time to do that way. Big whoop-de-doo.

Account Manager, David, provides his opinion on the new interface:

“Users are used to seeing labels for tabs such as segments, filters, and columns. The new interface uses symbols instead, which may not always be as clear as literally saying what something is. The new interface offers more features such as Promotions Extensions — most likely because they’re trying to drive users to the new interface with an incentive — but at the expense of review extensions.”

How it was before with labels

How it is now with symbols. 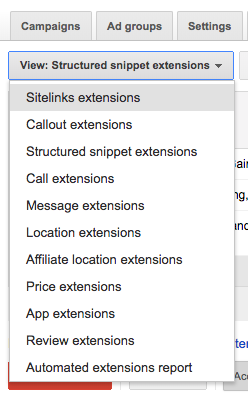 Who really cares about the Promotion extension?

In the picture above, you’re instantly in the Campaign view, whereas in the new interface, you have to actually select Search campaigns to get to a similar view.

Or, I could have just clicked Campaigns like before.

The new interface looks a lot busier compared to the original version too.


“Just seems like they’re focused on trying to make things look pretty, as opposed to functionality. When I log into the old interface, I used to see all campaigns at a glance. Now, I have to take an extra step to see the information I personally felt was more valuable to my client.”

Wrap Up on AdWords Update 2018

Okay, we don’t want to leave being completely negative. The one thing our team conclusively can say they think is really cool about new AdWords updates in 2018 is the addition of Google Showcase Shopping Ads. 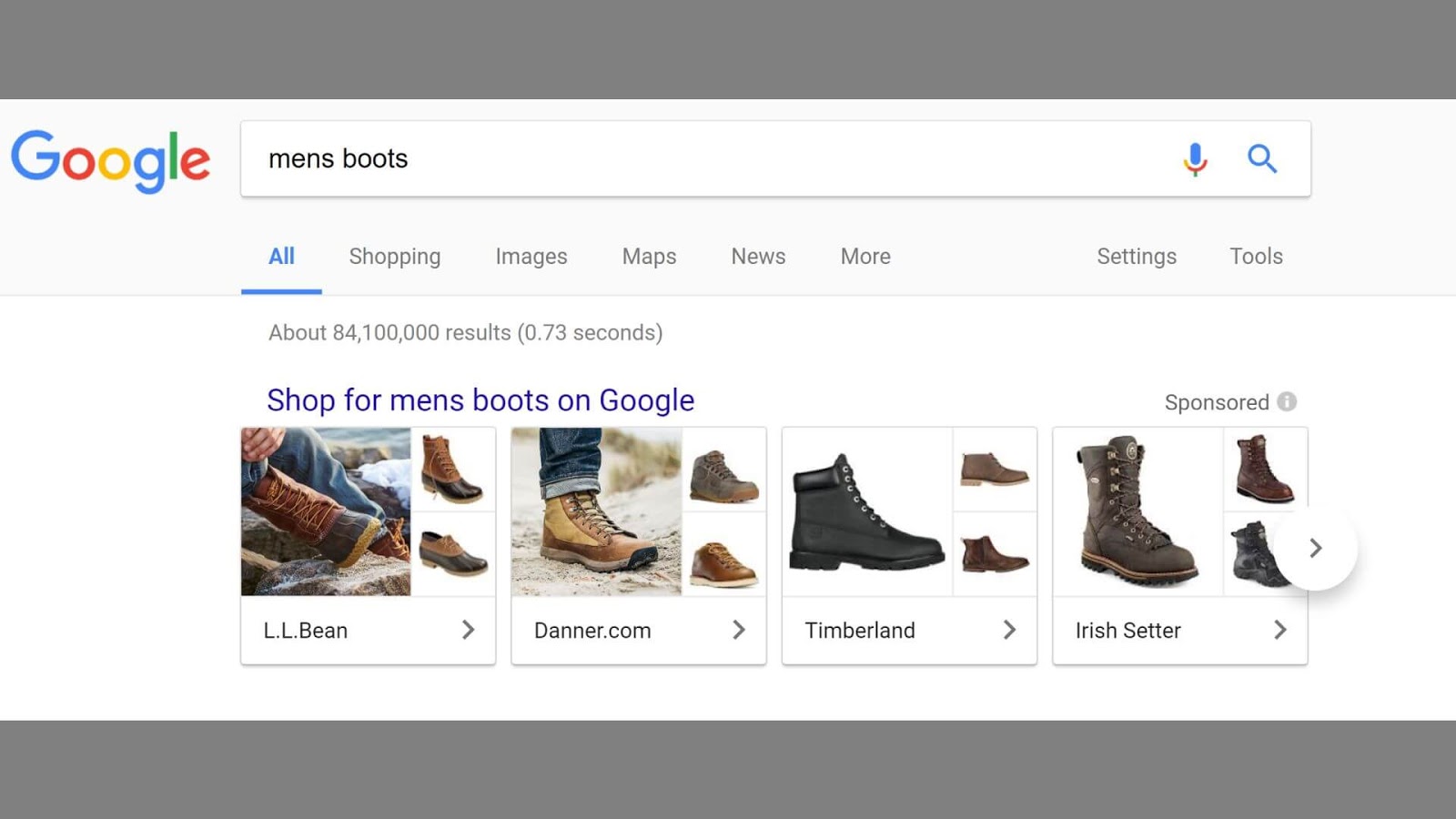 It was not previously an option until recently.

That being said, our Account Manager, Arik, sums up the popular opinion about the recent AdWords updates:


“That’s like going from a Nokia Brick straight to an iPhone X.”

Basically, gradual progression, people can get used to — but busy PPC managers find themselves having to learn and get familiar with an awful lot while still trying to provide the best service to their clients. Although big changes can create big buzz, sometimes your users prefer “baby steps” over a big leap.