The Case For Expanded Text Ads: What You Need To Know

You may have seen posts about Expanding Text Ads expanding again in recent weeks. Don’t worry, it’s not double vision kicking in.

Google has decided to double down on the expansion of text ads by offering even more space for your ad copy. You’ll have nearly twice as much room to drive value with copy and CTAs, which can boost the CTRs of your ads.

So what does this new expansion include? And what does it mean for your search advertising campaigns?

We’ll answer all those questions and more. This blog post is all about ETAs and how they can improve your search campaigns.

The first time we heard about Expanded Text Ads was in 2016. At the time, Google doubled the size of their traditional text ads for search advertising. Even back then, marketers’ excitement for the new ad copy space was dramatic.

But when some campaigns implemented Expanded Text Ads and saw click-through-rates jump as much as 20%, that enthusiasm seemed pretty appropriate. 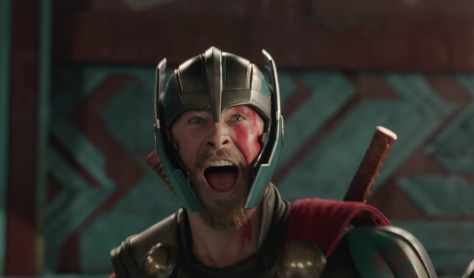 Google is increasing the size of their Text Ads once again.

In the previous form of Google’s Expanded Text Ads, you only got two headlines — now you get three. Each headline’s length is still 30 characters, but that 33% increase in real estate is worth its weight in ad copy gold.

You also get an extra description in the new Expanded Text Ads, as well as an extra 10 characters in your description length. We’ll go into what each of these new expanded features means for your ad campaigns later on in this post. 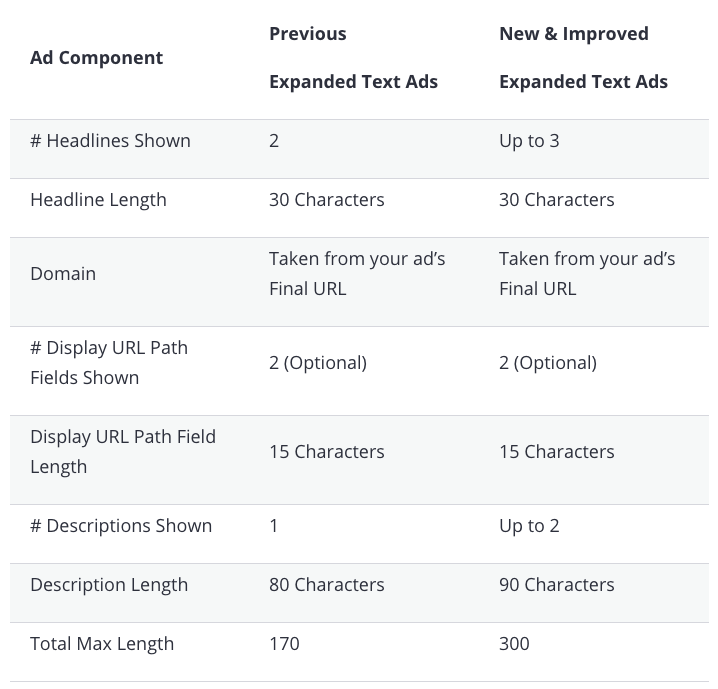 Let’s get started, shall we?

What You Can Do With The New Expanded Text Ads

In the next few sections, we’ll cover the features and expansions that will be included in Google’s new Expanded Text Ads for search advertising.

We’ll also compare and contrast them with the previous form of ETAs, so you can see what you’re getting and what you’re losing.

The new Expanded Text Ads are one of many new search network offerings that Google has introduced since the Google Marketing Platform consolidation and Google Ads rebrand.

Google is evolving, and so are its ad formats – image source

Having said that, you don’t have to worry about your existing ads disappearing when these new ETAs are implemented.

However, just as traditional Text Ads were eventually replaced by the previous form of ETAs, you should expect the same from the new ETAs. The more successful new ad formats become, and the higher the adoption rate, the more likely Google is to replace the old formats entirely.

This is because Google wants to use the ad formats that are most effective for digital marketers. What makes an ad format successful in Google’s eyes?

Notice how the ROAS of the ad isn’t up on that list of Google’s priorities?

“That’s because they aren’t worried about the ROAS of your campaigns, simply the CTRs of your ads. That’s where Google is making its money from your PPC campaigns, after all.”

Google, you sly dog… we’re on to you – image source

The ad formats that Google keeps, therefore, will be those that work best. And that’s measured by which ads are clicked the most and create the most ad revenue for Google.

The only options for search advertising these days are Expanded Text Ads and Responsive Search Ads (RSAs). Both of these formats have a significantly higher CTR than traditional short-form text ads, so Google offers them exclusively now.

So, needless to say, keeping up with new ad formats is more than worthwhile.

Now, there are some discrepancies between those who consider Expanded Text Ads successful and who don’t. (This is usually the case with new digital marketing tactics, tools, and data.)

Most marketers like to reference the percentage that I used at the beginning of this blog post. As a reminder, 20% of digital marketers saw an increase in CTR on their first ETA rollout.

If you’re in this camp, you’re probably pretty excited for the ETA size increase.

And you should be. Some campaigns have seen click-through-rates increase as much as 15% since the release of the new Expanded Text Ads.

Seems worth considering in my opinion – image source

There are some, however, who have doubted the actual efficacy of Expanded Text Ads since their initial rollout.

And they aren’t exactly no-names either.

But what makes the study interesting is the outlying changes that they found.

For instance, their data analysis passed through January 31st, 2017, which is when traditional text ads were officially removed and only expanded text ads could be loaded into Google Ads. 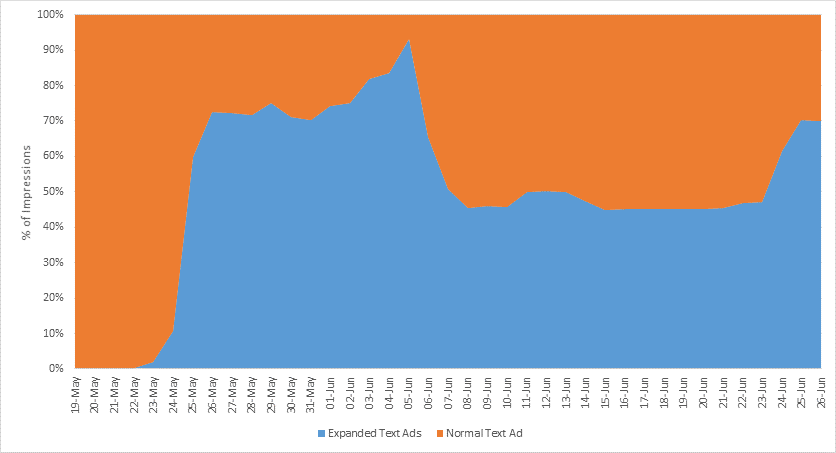 This could skew some performance stats for sure – image source

This could lead to a significant increase in click-through-rates for Expanded Text Ads — but not necessarily an earned one. The lack of competition from the other ad format would be the primary cause behind any bump in CTR.

On top of that, you can see in the screenshot below that the CTRs of the average search advertising campaign across text ads on Google didn’t show any significant increase by using Expanded Text Ads.

Do you see the variance in CTRs from the initial ETA launch to now? – image source

Search Engine Land also made another important observation that could skew the reporting of ETAs performance increase.

Google finally removed text ads from the right side of the desktop search results in March 2016. This resulted in a massive spike in CTRs for Expanded Text Ads, which became the sole ad format at the top of the SERP.

ETAs had a clear effect on their CTRs – image source

What Does This Mean For Expanded Text Ads – Are They Legit?

So what exactly does this mean for Expanded Text Ads? If the conspiracy holds true, then Google may or may not have removed after additional text ads for the sole purpose of increasing their own revenue from ordinary search advertising.

But, is that really news to anybody?

The truth is that even if Google did so to increase its own ad revenue they did so by attempting to increase the average CTRs of ads across the PPC industry.

“By giving advertisers more real estate to increase and improve their ad copy, Google is helping advertisers make their ads more relevant to the actual search queries of their target audience.”

This leads to users finding more helpful answers to the questions/needs they type into Google. Which means more clicks on your ads, which means more money for Google.

This is probably why Google Product Listing Ads have seen the highest increase in CTRs since the rollout of Expanded Text Ads (31%).

Of course, good marketers know better than to rely on a new tool/tactic to increase performance immediately. Believing that ETAs will automatically outperform your old ads is a recipe for disaster.

Make sure you take the time to launch, track, test, and optimize your new Expanded Text Ad campaigns before deciding to pause your old ads.

As a quick side note, it’s also important to remember that not every part of your new Expanded Text Ad will show on Google SERPs. While Google has recognized the importance of including more ad copy in its ads, it also prioritizes fitting enough ads into each SERP for variety’s sake.

Therefore, depending on the SERP that you’re targeting, your entire may not show. Some of it may get cut off — in fact, the entire third headline may get cut off.

So, it’s important to emphasize the most vital aspects of your ad copy in your first headline and in the front parts of your second headline.

Don’t dawdle. Get your users attention and capitalize quickly.

If you can get past the conspiracy theorists at Search Engine Land and are a firm believer in the increasing CTRs that we’ve seen across the average PPC campaign, then you’d love to see the stats below.

Long-form text ads on the Google search network average 15% more clicks than other ad formats. This is similar to what Google has said since they first released Expand Text Ads back in 2016.

However, across the entire industry, even those who supported ETAs found that the transition was not always the easiest for PPC managers/optimizers. For this reason, most digital marketers suggest that you keep running your existing ads before committing to the new Expanded Text Ad and RSA formats.

The last thing I want to address in this post is a feature that Google rolled out with the new form of Expanded Text Ads. These are called Responsive Search Ads, or RSAs.

These RSA campaigns are far more elaborate than their Expanded Text Ad counterparts. You can start scaling your ad testing by using RSAs to create a massive array of ad copy and even ad creative with a little help from the Google algorithm and some AI learning.

With RSAs, you insert 3-15 headlines and 2-4 descriptions and leave the rest to Google.

In terms of actually building an RSA campaign, the page and the actual setup looks quite similar to ordinary text ads. You just have additional options to include much, much more content.

Google will create different iterations of your ad copy and ad placements to test this content on different audiences. You’ll be able to see which version works best to increase your CTRs and hit your goals.

And before you start freaking out over the computers taking your PPC managers‘ jobs: Yes, you can still edit these ads.

But we can dive deeper into RSA campaigns another time; that’s a post for another day.

Expanded Text Ads: Make Use Of The Extra Real Estate

By now the importance of keeping up with Google’s ad format updates should be clear. But, more importantly, you should understand the why behind Google’s new ad formats.

It’s important for you to internalize the fact that Google is out to make money for itself. By keeping that in mind, you’ll be able to work the system and maximize your CTRs without sacrificing your ROAS or burning through ad spend.

So, now that you’re armed with the latest information on Expanded Text Ads (and you’ve spent some time optimizing your expanded PPC ad copy), it’s time to get to work.

Make the most of the extra real estate you’ve been given. Get out there and become the PPC conversion mogul that we all want you to be. ?