How Emotional Copywriting Is Complete Bogus

Logic is more important than emotion for conversion

There’s a general consensus among copywriters, designers, and marketers that evoking an emotional response is the key to conversion.

Read on and you’ll find several examples–some real world and some conversion specific–of why that’s not (always) the case, and why emotion may not be all it’s cracked up to be.

Still, it’s easy to see where that perception has come from; lots of people are eager to categorize themselves as a certain type of person.

Most of us follow at least one brand on social media, we wear t-shirts advertising our favorite brands and adorn our laptops with startup stickers.

It’s clear that emotions are important when it comes to purchase habits and how we engage with brands, but an emotional response doesn’t explain why we react to brands in a particular way.

The more I thought about this, the more I started to wonder whether emotional copywriting/advertising is as key to conversion as people think.

There’s no denying that the ad was extremely powerful, and it made some serious waves online.

While I do remember that the ad was for a battery brand, I couldn’t tell you which one.

At a push, I would guess Duracell* but it could just as easily have been Energizer as well.

*I later checked, and my hunch was correct.

I’m willing to bet that you’ve had an exchange like this at least once in your life:

“I saw a great commercial the other day! This and that happened, and then someone said this!”

While there’s no denying that we engage with storytelling when it’s done well, the link between a good story and conversion isn’t as clear as many people think.

So what DOES motivate conversion? 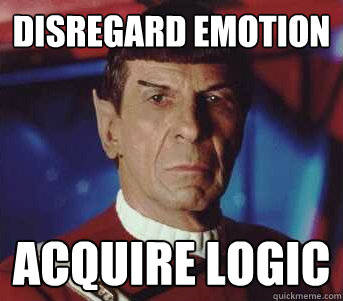 Let’s not get all emotional here – Image source

Emotion may be a factor, but it’s logic that really influences conversion.

Now, ‘logic’ is much too vague a concept to actually put to use in CRO or pay per click, so it needs to be broken down into a few different component parts.

When I say logic, I mean that the PPC ad or copy demonstrates why the product in question is a solid purchase.

Let’s take a real-life example of this: 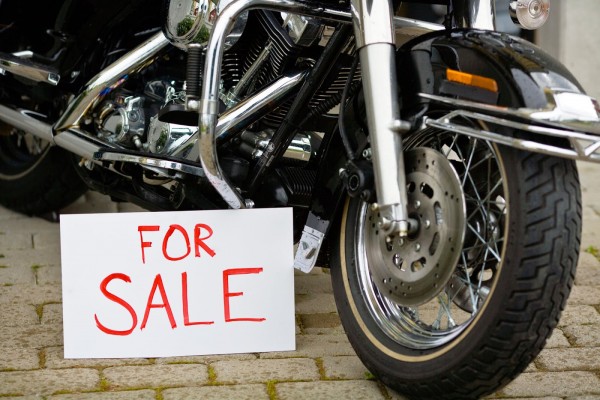 Using logic, would you purchase this bike? – Image source

A married father of two has always wanted a Harley Davidson.

Harleys are associated with free spiritedness and adventure, which can be very emotionally appealing to a certain type of person.

But will he ever actually buy the Harley?

Odds are that he’ll end up buying a station wagon, because he has to get the kids to school/soccer practice (convenience).

Not to mention his wife is worried about him crashing the bike (safety).

That’s just one example of a case in which an emotional response is insufficient to trump logic.

Now, let’s take a look at some examples from the world of A/B testing.

This article from Unbounce highlights a case in which creative copy that attempts to portray an emotional benefit falls flat when tested against a generic, ‘boring’ headline. 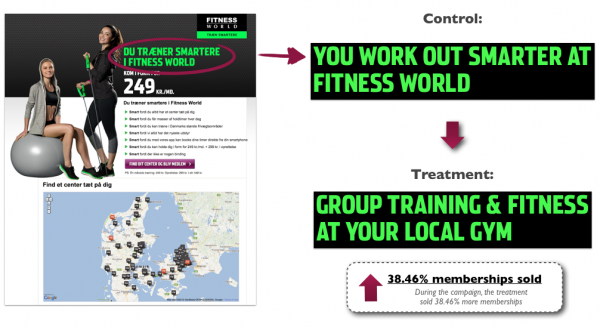 The latter, which improved conversions by over 38%, appeals to a logical mind; ‘activities at my local gym’ implies “I won’t have to travel much and will save myself some time.”

Meanwhile, ‘train smarter’ is a pseudo-emotional buzzword that lacks substance. 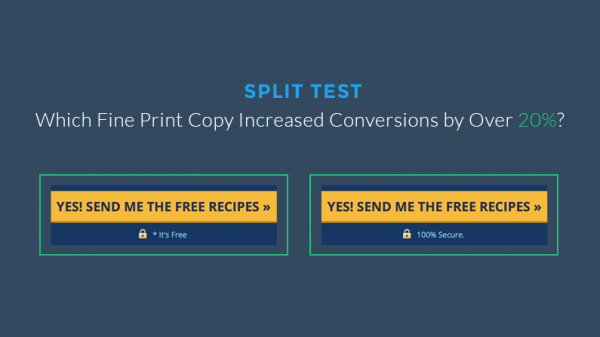 Why would you put the idea that it’s NOT secure in my head? – Image source

You see, ‘100% secure’ appeals to those who are fearful–a classic emotional response–about their personal information being compromised, but it loses out to an alternate that focuses on value for money.

There’s plenty of information out there about ‘color psychology‘.

It’ll tell you that monochrome is classic and timeless, that orange is creative/bold and that pink is soft and feminine.

Lots of CRO testers get wound up thinking about color when they first start testing.

But a quick glance at this blog post shows that there is no silver (or red or blue…) bullet when it comes to predicting whether a certain color will have a better impact on conversions than another.

The fact that the impact of color varies wildly from brand to brand, product to product and customer to customer reminds us that emotion is not the only factor in play when it comes to conversion.

If it were, green buttons would ALWAYS win out and no website would ever use anything else.

Because that’s not the case, we know that conversion is a much more inexact science than that.

The idea that logic is used to justify a purchase made on the basis of emotion is a very common one.

It’s also one that I believe to be a fallacy.

The following is a quote from email marketing app Vero’s Head of Content, Jimmy Daly:

“A behavioral email is, in the simplest terms, one that is sent to an audience of one. And what I mean by that [it] is an email that is triggered based on a behavior, as the name suggests, and triggered for a very specific purpose…

Behavioral emails work best in a series where you’re sort of stringing people along from one step to the next until you get them to an ultimate goal.”

This is particularly relevant in the SaaS space, where the standard model is to offer a free trial, as customers are likely to be directly comparing at least a couple of different competitors before making a decision.

Such emails are important to keep potential customers moving down the path you want them to take.

The idea of moving someone down a funnel–website visit, free trial signup, first time using the software etc. all the way through to conversion–feels about as far from an emotional response as one can get.

It’s very methodical, takes time and doesn’t fit with the idea that people trust a ‘gut reaction’ over other evidence.

You need emotion AND logic.

In a PPC ad, you don’t have much space to get people interested.

A succinct benefit statement that provokes an emotional response–makes them laugh or gets them worried–and is quickly followed up with a clear, logical selling point is usually a winner.

When it comes to optimizing website copy for conversions you have a little more space to play with, but want to be following the same guidelines.

Take a look at the manifesto of social network Ello: 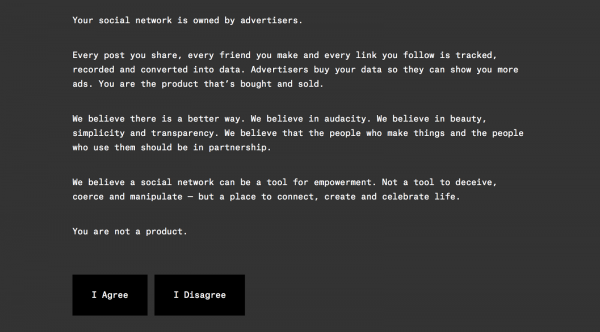 Got a little riled up didn’t cha?  – Image source

It begins by evoking fear–advertisers are tracking your every move and using that data to sell you things.

But, although the landing page designs evokes emotions, it ends with a CTA that appeals more to your logical side.

“You are not a product. Agree?”

Despite everything I’ve written above, I’m not naive enough to believe that emotion plays no part in the conversion process.

But I don’t think that it’s the silver bullet marketers believe it to be either.

Back in 1974, marketing professor Philip Kotler said the following:

“Buyers respond to the total product. It includes the services, warranties, packaging, advertising, financing, pleasantries, images, and other features that accompany the product.”

Without a logical process to follow, one that lays out benefits of the product and advantages over its competitors, any attempt to evoke an emotional response will feel shallow and empty.

Still, emotion is undoubtedly a part of the mix. 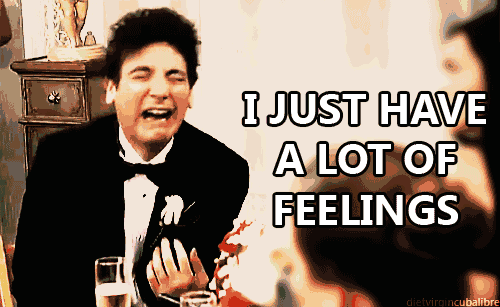 Kotler went on to say that

“in some cases, the place, more specifically the atmosphere of the place, is more influential than the product itself in the purchase decision.”

Separating logic and emotion isn’t as easy as it seems…

We’ve seen in several of the above examples how both emotion and logic are important.

Let’s return to the SaaS example I mentioned above.

Say a customer downloads free trials of two different products and inputs some sample data into each one.

Product 1 is fairly easy to use, but a bit cold and sterile.

The customer encounters a problem, asks the support team a question and receives a bland email about how to address it.

Meanwhile, Product 2 is slightly more complex but has lots of character.

The customer receives a tweet asking if they need any help after signing up, an intro email explaining some of the product’s features and receives an answer to a support query that goes above and beyond the call of duty.

The customer is probably more likely to go with Product 2, seemingly because the company is much more friendly (emotional).

But it’s also clear from the above that they have more avenues to deal with any issues that arise (logical) and that the product itself may be ‘deeper’ than Product 1.

There are lots of factors for marketers to consider!

The difficult thing here is that separating emotion and logic isn’t actually as easy as it should be.

The most effective benefits (e.g. free, easy-to-use, proven) appeal to both aspects of human nature.

Logic and Emotion – two sides of the same coin 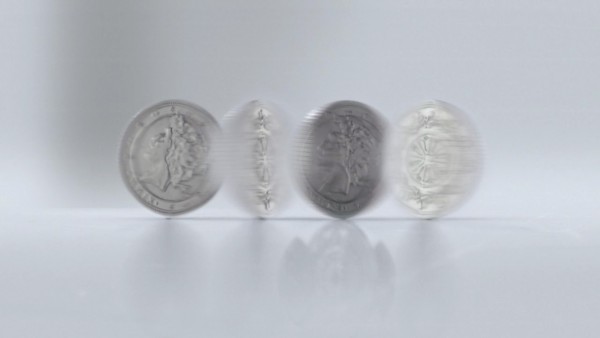 Let’s use both, shall we? – Image source

The more you think about the role of logic vs. that of emotions in conversion, the more you start to see words in common with the left/right brain discussion.

Although the science behind the left or right side of the brain being more dominant is questionable, the majority of people still tend to exhibit a greater number of ‘left-brained’ characteristics than ‘right-brained’ or vice versa:

These lists could just as easily refer to the values behind two different types of branding/copywriting that would appeal to two very distinct types of people.

It’s very unlikely that any audience is made up of solely left-brained or right-brained people, which means that the coin of logic/emotion is one that must be spun rather than flipped to land on a single side.

This article was borne out of frustration.

Time and time again, I see articles and blog posts proclaiming that emotion is the only thing that matters when it comes to conversion.

I set myself the difficult task of trying to prove the opposite, and found myself somewhere in the middle.

So what can you take away from this article for your own marketing and advertising efforts?

Emotion primarily dictates what people want, not the ultimate purchase.

The guy I mentioned at the start of this piece may want the Harley Davidson, but it’s more likely that he’ll end up with that station wagon.

Likewise, while you may be inclined towards something based on an emotional response, it’s logic and reason that dictates the final conversion.

For PPC managers and CRO experts, this can be helpful because it allows you to think of the conversion process in the following way:

The success of click bait headlines has shown marketers that people do respond to “you won’t believe what happened next!” and “X will blow your mind”, but ultimately…

Logic is responsible for the conversion.

That’s why most people very quickly close the window, and click bait articles have a bad rep.

The same is true of any other web page.

Unless you can lead people through a page or an ad in a logical way, they won’t convert; you probably had an emotional response when you read the title of this article and maybe, just maybe, if you’ve made it this far I might have converted you.

But based on the title alone?