How To Create The Best
Landing Page Post Conversion Opportunities

The comfort of knowing you’ve got a happy customer all taken care of, and all you have to do is enjoy the glow and wait for your next new convert.

Or, you know, you could try to satisfy your happy customer again.

It’s a n00b mistake to assume that your converted customers are now less important than your new leads.

Smart businesses understand the importance of post-conversion tactics that help you satisfy converted customers many, many times. 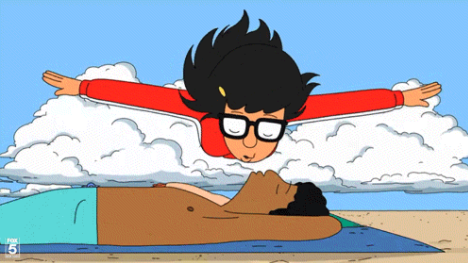 Which post-conversion tactics should you use?

You’re probably familiar with a lot of them:

Post-conversion tactics are designed to remind current customers why they should buy from you again, and these familiar tactics place your business right in front of your satisfied customers.

The trouble is that your customers are also very familiar with these post-conversion tactics.

Even if they don’t know what they’re called or why businesses send out post-conversion emails, they still think “oh, another survey” before hitting the Archive or Delete button.

And sometimes your customers don’t even see your messages.

Google’s email tabs often mean your post-conversion messages go straight from the visible, “Primary” inbox into the “Promotions” tab, meaning unless you take strategies to put your emails back in Primary—such as by asking your customers to drop the email they are reading into the Primary tab, all your post-conversion work gets lost.

So today’s marketers have to get very smart about their post-conversion tactics.

Their emails need to inspire and delight their customers, not just make one of the standard post-conversion offers.

They also need to avoid accidental missteps, such as sending a product review request before the product has even arrived.

With that in mind, let’s take a look into my own inbox to see which post-conversion tactics have worked on me, and what we all can learn from them.

I love my weekly Eat24 email.

Every Friday, Eat24 emails me a coupon which I immediately archive because I practice Inbox Zero.

But I know it’s there, and I know that come Saturday evening when I want to order takeout—which happens more often than I want to admit—all I have to do is search my email for “Eat24” and I’ll get the latest coupon. 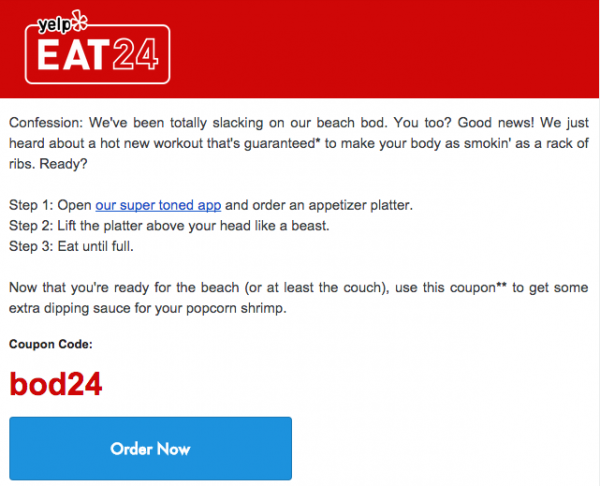 As a bonus, the Eat24 email is nearly always hilarious.

How successful is the email coupon campaign as a post-conversion tactic?

Direct Marketing has some eye-opening stats:

Experian’s 2013 Q4 Email Benchmark report shows that emails with some form of coupon have a 14% higher unique open rate, a 34% jump in unique clicks, a 27% increase in transaction rates, and a whopping 48% boost in revenue per email, compared to other types of promotional emails.

On a personal level, this post-conversion tactic works for me because Eat24 is offering me something I already know I want (delicious food) and giving me the same coupon every week.

There’s no stress about whether I’m missing the one chance to take advantage of a great deal, or whether I should wait for the next big promotion because it might be even better.

It is literally the same offer every week, take it or leave it—and, often enough, I take it.

Old Navy sends me at least two emails every day.

Last Friday, they sent me three.

Each of these emails has a different sale offer—tanks, shorts, swimwear, 60% off everything—and it just blurs into a giant mess that I instantly archive out of my inbox.

Old Navy is using the same post-conversion email coupon tactic as Eat24, but even though I shop at Old Navy about once a month, I never dig into my email to pull out an Old Navy coupon.

Even though I know it might save me money, there’s too much stress involved.

I don’t want to read the 14 emails they sent me in the past week—yes, they sent fourteen promotional emails—to figure out which sales are still active, which deals are the best, and how to maximize my purchase.

My time is more valuable than the money Old Navy is trying to get me to save, and even if they could get me a great deal on something I need (like their recent $2 tanks offer) I’m deliberately choosing to ignore the coupons because there are too many of them.

This is way too much information for me to process—and that isn’t even the entire email.

This May, my freelance coworkers got very excited about an app called Crystal, which “shows you the best way to communicate with any coworker, prospect, or customer based on their unique personality.”

When I signed up for Crystal, they were processing new users as they arrived but offered me the chance to bump to the top of their list in exchange for a social share, so I did it:

Here’s what Moz has to say about the effectiveness of the social shares plus bonus tactic:

One of the oldest tricks in the book is to ask customers to share the product they bought in return for a free extra—perhaps an information product or entry into a competition.

They also cite a few conversion stats based on a Groupon social share button:

After a customer bought the deal, we offered them the chance to share the deal with their friends in return for an extra $100 worth of free discounts. This resulted in over 250 Facebook shares, which had two consequences:

In other words, placing an incentivized share button on the thank you page directly generated about $2,300 in extra revenue over the five days, while boosting the conversion rate of all other traffic sources by 2.7%.

How does social sharing work from a customer’s perspective?

I am most likely to social share when I have an emotional investment in the product or company I’m sharing (like when I’m sharing my friends’ Kickstarter projects, for example).

In this case, I had very little emotional investment in Crystal—but they were offering a bonus that was useful to me, so I was willing to trade them a social share for faster access to their service.

I recently ordered a pair of glasses through Warby Parker.

They provided excellent customer service throughout the process, from the free glasses samples they sent to my apartment to the way they expedited me a new pair of glasses when the initial order arrived with an incorrect prescription.

(This, by the way, may have been my optometrist’s fault rather than Warby Parker’s; I don’t know where the communication error occurred.)

But Warby Parker also sent me an email with the subject line “Three Cheers for Feedback” before my glasses arrived, which seemed like an unfortunate misstep in what had otherwise been a great process. 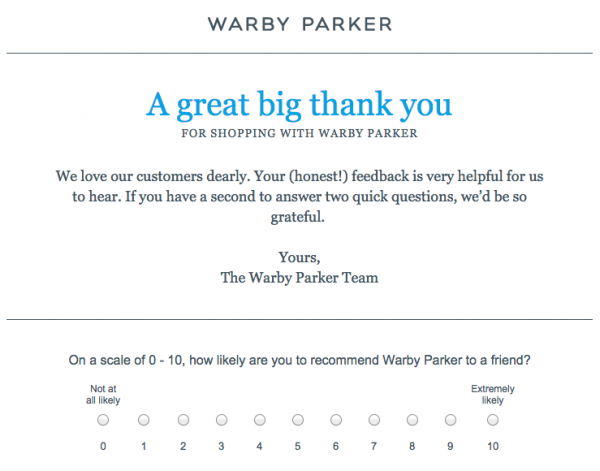 I’d be a lot more likely to recommend your product if I actually had it in hand.

Unbounce lists post-conversion feedback as one of its top strategies to increase customer lifetime value, noting:

For many businesses, feedback is more valuable in the short term than revenue. Yet, for some reason, too few businesses proactively collect it.

But make sure your customer already has the product in hand before sending out your feedback request.

In my case, the request probably arrived early because the email autoresponder had not realized that there was a problem with my order and I had not received my glasses on the usual schedule.

If that might be the case with your customers, consider adjusting your post-conversion emails to accommodate this.

Otherwise, your customers will grumble—like I did—”but I don’t have my product yet!”

(I did, by the way, complete my Warby Parker feedback after I received my glasses. So maybe this counts as a success story too.)

I know, it’s hardly fair to mention Amazon—they’re so huge!

But I wanted to get an example of the upsell tactic in this post, and I upsell myself on Amazon all the time, thanks to their tailored recommendations.

Recently, for example, I was buying a gift for a friend—a themed expansion pack for the popular Munchkin card game.

Amazon suggested I add on another themed pack, and suddenly my friend got twice as much gift!

I also regularly upsell myself on Eat24—yes, I would like rice with that—and am very happy to add on a low-cost extra that looks like it will bring a little extra joy to my purchase. 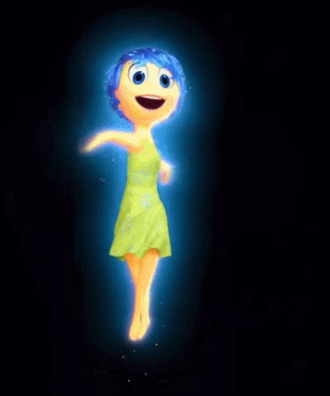 How do upsells work as a post-conversion tactic?

Shopify has the statistic we’re all waiting for:

According to one Forrester research analyst, product recommendations like upsells and cross-sells are responsible for an average of 10-30% of eCommerce revenues.

What post-conversion tactics have worked the best on you, and which ones do you ignore or send to the depths of your email archive?

Do you have any post-conversion horror stories?

We want to hear everything.